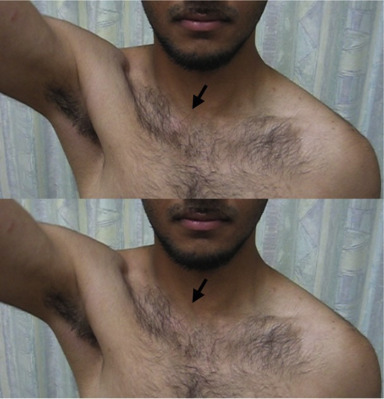 Sternoclavicular joint (SCJ) instabilities are rare, and traumatic sternoclavicular injuries comprise only 3% of all shoulder injuries, with anterior dislocations more common than posterior dislocations.
9
Die Instabilität des Sternoklavikulargelenks.
Orthopade. 1998; 27 ([in German]): 567-570
Despite the direction of dislocation, it is currently recommended to attempt closed reduction to prevent poor long-term clinical outcomes.
17
Sternoclavicular joint dislocation: a systematic review and meta-analysis.
J Orthop Trauma. 2019; 33: 251-255https://doi.org/10.1097/BOT.0000000000001463
However, closed reduction is successful in only 38% of attempts,
10
Anterior buttress plate is successful for treating posterior sterno-clavicular dislocation.
Knee Surg Sport Traumatol Arthrosc. 2019; 27: 251-258https://doi.org/10.1007/s00167-018-5298-3
and despite successful closed reduction, residual instability often remains. If closed reduction does not work, then open treatment should be considered.
A significant amount of force, directed from a posterolateral direction, axially applied to the acromioclavicular joint on a fixed torso, is required to disrupt and anteriorly dislocate this joint. Although there are various stabilization techniques with varied results described in the literature, none have taken into account the configuration of the ligaments and the force vector of translation at the SCJ. We describe a technique that incorporates fixation in conjunction with a reversal of the displacing force vector.

A 17-year-old male student complained of pain in the SCJ after completing bench presses in the gym. He had no relevant medical or surgical history. This pain continued and gradually became worse over the next few months. The patient felt pain and a sense of anterior instability and clicking with overhead activities at the SCJ, which progressed when performing simple activities of daily living.
The joint reduced spontaneously initially and by self-manipulation later, and finally, it was difficult to manually reduce and was extremely painful. After 4 months, the patient saw 2 shoulder surgeons, who advised continued nonoperative management. He then attended our practice because of continued and severely debilitating symptoms. He presented with a frequently irreducible and painful SCJ that significantly affected his activities of daily living and disturbed his sleep, and he regularly took time off work because of pain.
Physical examination findings showed laxity in the anterior direction with palpation of the right medial clavicle and spontaneous subluxation with overhead shoulder motion (Fig. 1). This required manual digital compression to reduce. No esophageal or tracheal manifestations were noted, and the region was neurovascularly intact. No other physical findings were evident, with a normal acromioclavicular joint and glenohumeral joint. The results of plain radiographs and computed tomography scans were unremarkable. Because the pain and subluxation worsened despite nonoperative treatment for a total of 6 months and the patient needed to return to his manual work, the decision to perform reduction and stabilization with surgery was made.

A 5-cm horizontal incision was made centered over the SCJ with layered dissection protecting the larger cutaneous nerves and elevation of the platysma muscle down to the SCJ. A horizontal incision was made through the anterior capsule and its ligaments with these structures elevated from the anterior aspect 2 cm on either side of the SCJ, dissecting meticulously over the superior aspect and then the posterior aspect of the joint (Fig. 2). The lateral 50% of the sternal footprint of the sternocleidomastoid was elevated as part of the capsulo-periosteal sleeve. The posterior dissection carefully elevated the periosteum from the manubrium and medial clavicle to allow placement of a protective blunt metal retractor.
A 4-mm drill hole was made at 1 cm on either side of the joint directed in the anteroposterior plane protecting the posterior mediastinal structures. The great vessels of the superior mediastinum are immediately posterior to the SCJ. These include the aorta and its principal branches, the jugular vein, and the superior vena cava. The trachea, esophagus, and recurrent laryngeal nerve are also in close proximity.
A TightRope (Arthrex, Naples, FL, USA), more commonly used in the stabilization of a diastasis in ankle fractures, was used. A 4-strand dual-EndoButton nonabsorbable suture (Smith & Nephew Endoscopy, Andover, MA, USA) was introduced through the manubrium in the anteroposterior direction and through the hole in the medial clavicle in a posteroanterior direction (Figs. 3 and 4). The EndoButton was positioned to reduce and hold the sternal end of the clavicle in a direction 30° superior and posterior to the horizontal. This reversed the instability vector of anterior translation. The periosteal sleeve and the footprint of the sternal head of the sternocleidomastoid were double-breasted with No. 2 Vicryl (Ethicon, Somerville, NJ, USA) to plicate the structures anterior to the EndoButton (Fig. 5).
The patient underwent rehabilitation in a broad arm sling; cryotherapy and nonsteroidal anti-inflammatory tablets were avoided to prevent a delay in tissue healing. Gentle mobilization exercises were commenced for 6 weeks, and full active range-of-motion exercises, by 3 months. He became symptom free at 6 months (Fig. 6) and remained symptom free at a 3-year review. However, at a 5-year review, he started to show anterior instability again and to have pain, with no specific history of injury, although he continued his manual work and gym workouts. We have subsequently ceased using the TightRope device for SCJ instability and have progressed to tendon allograft reconstruction.

Because the potential cheese-wiring effect of the TightRope implant is a concern for future recurrence of dislocation and instability, we no longer recommend this device for SCJ stabilization. We favor the described surgical technique of neutralizing the displacing vector but with tendon allograft reconstruction in place of the TightRope implant.

The authors, their immediate families, and any research foundations with which they are affiliated have not received any financial payments or other benefits from any commercial entity related to the subject of this article.

© 2019 The Author(s). Published by Elsevier Inc. on behalf of American Shoulder and Elbow Surgeons.