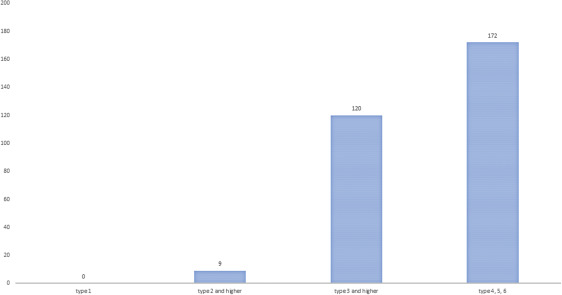 Treatment of acromioclavicular joint separations in Japan: a survey

Treatment of acromioclavicular joint separations in Japan: a survey
Previous ArticleAcute brachial plexus deficit due to clavicle fractures
Next ArticleShould closed reduction be attempted in the emergency department for an acute anterior shoulder fracture dislocation?

Treatment options for acromioclavicular joint (ACJ) separations are highly dependent on severity, as well as the patient’s background. Furthermore, some patients can be switched from conservative to surgical treatment. In this study, we conducted a mail-based questionnaire survey of members of the Japan Shoulder Society on the administration of treatments for ACJ separations.

A questionnaire survey with 5 categories was mailed to all 1655 members of the Japan Shoulder Society (including 59 councilors): initial treatment, whether surgery was performed, indications for surgery based on severity, switching from conservative to surgical treatment, and surgical methods.

Altogether, 183 members, including 56 councilors, responded. Regarding the initial treatment, 17 respondents opted for treatment without immobilization or fixation and 166 opted for immobilization or fixation. Of the members, 11 opted for only conservative treatment whereas 172 chose surgery depending on the case; of the latter, 9 considered it for patients with a Rockwood classification of type 2 or higher; 120, for patients with type 3 or higher; and 172, for patients with types 4-6. Furthermore, 75 of 172 members had experience switching to surgical treatment during conservative treatment. For 64 of 172 members, the modified Cadenat method was the most common surgical method.

Only 11 members opted for conservative treatment of ACJ separations, and approximately 95% of physicians chose surgery. Furthermore, >70% of physicians considered surgery for an injury classified as type 3 or higher, and 37% of members performed the modified Cadenat method. However, the popularization of arthroscopic surgery may affect the selection of surgical methods in the future.

The choice of treatment for acromioclavicular joint (ACJ) separations is highly dependent on severity, as well as the patient’s background. Even for shoulder surgery specialists, there is no gold-standard concept for the initial treatment, indications for surgery, and surgical methods for acute injuries. Furthermore, some patients can be switched from conservative to surgical treatment over the course of the injury. The Tossy classification
23
Acromioclavicular separations, useful and practical classification for treatment.
Clin Orthop Relat Res. 1963; 28: 111-119
or Rockwood classification
15
Injuries to the acromioclavicular joint: subluxations and dislocations about the shoulder.
in: Rockwood Jr., C.A. Green D.P. Fractures in adults. JB Lippincott–Raven, Philadelphia1984: 860-910
is commonly used to classify the severity of ACJ separations; however, the classification method for determining the severity of surgery is not standardized. In this study, we conducted a mail-based questionnaire survey of delegates and members of the Japan Shoulder Society (JSS) on the administration of treatments for acute injuries with ACJ separations.

The respondents comprised 56 of 59 councilors of the JSS (response rate, 94.9%) and 127 of 1596 regular members (response rate, 8.0%), for a total of 183 respondents. A response rate > 90% was obtained among the shoulder surgeons (JSS councilors) who play a leading role in the JSS.
In terms of treatment options, 11 members opted for only conservative treatment in all cases and 172 members chose surgical treatment depending on the individual case. For the initial treatment, 17 members opted for treatment without immobilization or fixation; 142, treatment with a fixed upper-limb sling; and 24, treatment with a fixed orthosis for holding the shoulder joint. In the immobilization period, the length of sling fixation of the upper limb was 1 week for 10% of members (n = 14), 2 weeks for 36% (n = 51), 3 weeks for 42% (n = 59), 4 weeks for 4% (n = 6), and ≥1 month for 8% (n = 12), whereas the length of orthosis fixation was 3 weeks for 58% of members (n = 14) and 4 weeks for 42% (n = 10).
Among the 172 members who suggested the possibility of surgery, 9 considered it for patients with a Rockwood classification of type 2 or higher; 120, for type 3 or higher; and 172, for types 4-6 (Fig. 1). Factors other than severity on which the members focused regarding surgical indications were occupation (67%, n = 116), sports activity (52%, n = 91), and sex (33%, n = 56). Of the 116 members considering a patient’s occupation, in particular, 41 considered surgical indications to include carpenters, plasterers, and teachers (occupations requiring shoulder-raising positions); 28, civil engineering workers (including workers heavy handling heavy loads); 13, farmers; 2, fishers; 2, Self-Defense Forces personnel; 1, dentists; and 1, delivery workers. Furthermore, 108 members (61.4%) conducted surgery to prevent scapulothoracic joint dysfunction; 93 (52.8%), to prevent apparent deformity of the ACJ; 77 (43.8%), to prevent muscle weakness; 36 (20.5%), for early rehabilitation; 29 (16.5%), to prevent joint range-of-motion restriction; and 14, for other reasons.
During conservative treatment, 75 of the 172 members had experience switching to surgical treatment, excluding the 11 members who consistently performed conservative treatment. Of these members, 20 (26.7%) made the switch within 1 month; 28 (37.3%), within 1-3 months; 8 (10.7%), within 3-6 months; 9 (12%), within 6 months to 1 year; and 1 (1.3%), after 1 year. The reason for surgery was pain (n = 39, 52%), patient’s wishes (n = 16, 21.3%), fatigue of the shoulder girdle (n = 7, 9.3%), posterior instability of the ACJ (n = 5, 6.7%), postural problems (n = 5, 6.7%), worsening of severity (n = 3, 4%), limited range of motion (n = 2, 3%), or stiff shoulder (n = 1, 1%).
The surgical methods to be selected were roughly classified into open surgery and arthroscopic surgery (including some overlap; Fig. 2). Forty-eight members performed arthroscopic surgery for coracoclavicular ligament reconstruction, whereas 34 members performed arthroscopic coracoclavicular ligament reconstruction plus acromioclavicular ligament and deltoid muscle repair. Regarding open surgery, 67 members performed the modified Cadenat method
6
The treatment of dislocations and fractures of the outer end of the clavicle.
Int Clin. 1917; 1: 145-169
(regardless of internal fixation material); 31, coracoclavicular ligament reconstruction; 29, hook plate fixation; 27, the modified Phemister method
14
The treatment of dislocation of the acromioclavicular joint by open reduction and threaded wire fixation.
J Bone Joint Surg. 1942; 24: 166-168
; 25, distal clavicle resection; 24, coracoclavicular ligament reconstruction plus acromioclavicular ligament and deltoid muscle repair; 15, the Weaver-Dunn method
25
Treatment of acromioclavicular injuries, especially complete acromioclavicular separation.
J Bone Joint Surg Am. 1972; 54A: 1187-1194
; 12, ACJ fixation with K-wires; 11, the hook plate method plus conoid ligament reconstruction; 6, the Bosworth method
5
Acromioclavicular separation: new method of repair.
Surg Gynecol Obstet. 1941; 73: 866-871
; 3, the modified Dewar method
8
The treatment of chronic acromioclavicular dislocation.
J Bone Joint Surg Br. 1965; 47: 32-35
; and 3, the modified Neviaser method.
11
Acromioclavicular dislocation treated by transfer of coracoacromial ligament.
Arch Surg. 1952; 64: 292-297

For the treatment of ACJ separations, only 11 members performed conservative treatment regardless of severity and approximately 95% of respondents performed surgery as appropriate. Furthermore, >70% of members considered a Rockwood classification of type 3 or higher as an indication for surgery, and 37% of the total respondents chose the modified Cadenat method. However, the selection of surgical methods may change in the future owing to the popularization of arthroscopic surgery.

The authors, their immediate families, and any research foundations with which they are affiliated have not received any financial payments or other benefits from any commercial entity related to the subject of this article.

This questionnaire survey was approved by the Ethical Committee of the Japan Shoulder Society.

© 2020 The Author(s). Published by Elsevier Inc. on behalf of American Shoulder and Elbow Surgeons.