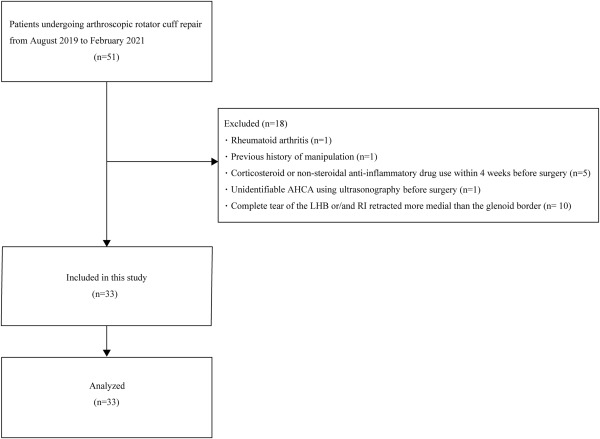 Blood flow in the anterior humeral circumflex artery reflects synovial inflammation of the shoulder joint in rotator cuff tears
Previous ArticlePain, paresthesia, and the rotator cuff: the prevalence and magnitude of shoulder pain and hand numbness and tingling before and after rotator cuff repair
Next ArticleThe effects of obesity on 1-year functional outcomes after arthroscopic rotator cuff tear repair

This study was approved by the relevant institutional review board, and informed consent was obtained from all patients. This was a prospective, cross-sectional study.

This study included patients with RCTs who underwent arthroscopic rotator cuff repair between August 2019 and February 2021 (Fig. 1). Of the 51 patients who underwent arthroscopic rotator cuff repair, 18 were excluded for one of the following reasons: rheumatoid arthritis or other collagen diseases; previous surgery or manipulation of the affected shoulders; history of corticosteroid, hyaluronic acid, or nonsteroidal anti-inflammatory drug use, including oral forms or injections, within 4 weeks before operation; patients in whom the AHCA could not be confirmed using US before surgery; and complete tear of the long head of biceps tendon because the ascending branch of the AHCA runs alongside the long head of biceps tendon.
12
Blood supply in the bicipital groove: a histological analysis.
Orthop Rev (Pavia). 2019; 11: 8106https://doi.org/10.4081/or.2019.8106
Furthermore, to harvest the synovial sample at a consistent point, cases in which the RI retracted more medial than the glenoid border due to the complete tear of subscapularis were also excluded. Finally, 33 patients were included.

We defined nighttime pain as an aching pain that disturbs sleep. We questioned the patients about the presence of nighttime pain or resting pain before surgery. The RCT size was evaluated intraoperatively using the classification introduced by Cofield.
5
Subscapular muscle transposition for repair of chronic rotator cuff tears.
Surg Gynecol Obstet. 1982; 154: 667-672

Ultrasonographic examinations were performed independently by 3 experienced sonographers with extensive experience in musculoskeletal US, using a LOGIQ E9 scanner (GE Healthcare, Bensalem, PA, USA) with a 6- to 15-MHz linear transducer. Blood flow in the AHCA was assessed using pulse Doppler US, as previously described.
37
Increased blood flow in the anterior humeral circumflex artery correlates with night pain in patients with rotator cuff tear.
J Orthop Sci. 2014; 19: 744-749https://doi.org/10.1007/s00776-014-0604-5
First, the color Doppler mode was used to identify the AHCA (Fig. 2, A). Pulse Doppler mode was used to measure the PSV in the AHCA on a longitudinal scan (Fig. 2, B). After waveforms appeared similar to each other, PSV was measured at the tallest waveform. On the nonoperative side, the presence or absence of RCT and PSV in the AHCA was also evaluated.
In a pilot study, intrarater and inter-rater reliabilities were assessed by examining 5 healthy volunteers.

During surgery, the synovial tissue samples harvested from the RI were immediately frozen in liquid nitrogen at −80°C for polymerase chain reaction (PCR) analysis. The remaining samples were fixed with 4% paraformaldehyde for histologic analysis.

Tissue samples were fixed with 4% paraformaldehyde for 24 hours and embedded in paraffin for histologic analysis. The samples were cut into 5-μm-thick sections. Hematoxylin and eosin staining was performed following the standard protocol. The degree of synovitis was graded using the synovitis score, as described by Krenn et al.
19
Synovitis score: Discrimination between chronic low-grade and high-grade synovitis.
Histopathology. 2006; 49: 358-364https://doi.org/10.1111/j.1365-2559.2006.02508.x
,
20
Grading of chronic synovitis--a histopathological grading system for molecular and diagnostic pathology.
Pathol Res Pract. 2002; 198: 317-325https://doi.org/10.1078/0344-0338-5710261
The synovitis score comprises 3 morphological parameters (enlargement of the synovial lining cell layer, the density of the resident cells, and inflammatory infiltrate). Three parameters were scored from 0 to 3 and summed to establish a total synovitis score ranging from 0 to 9. Each slide was independently evaluated in a blinded fashion by 2 trained and experienced orthopedic surgeons to assess interobserver reliability.

This study sought to estimate the correlation coefficient with reliable accuracy. Therefore, the sample size was designed to include 33 patients, assuming a Spearman's correlation coefficient of 0.6 and a 95% confidence interval (CI) width of <0.5.
3
Sample size requirements for estimating Pearson, Kendall and Spearman correlations.
Psychometrika. 2000; 65: 23-28
Patient characteristics were summarized as the median and interquartile range for continuous variables and as numbers and percentages for categorical variables. The inter-rater reliability for measuring PSV among the 3 examiners was confirmed using the intraclass correlation coefficient (ICC) of the 2-way random-effects model. The intrarater reliability for measuring PSV was confirmed by using the ICC of the 1-way random-effects model. To evaluate the validity of the arthroscopic and histologic synovitis scores, the ICC was calculated for values measured by 2 surgeons.
The PSV in the AHCA was compared between the operated and nonoperated sides using the Wilcoxon signed-rank sum test according to the presence or absence of RCT. To confirm the association between the PSV in the AHCA and synovial inflammation, Spearman's correlation coefficient was calculated. The Mann-Whitney U test was used to compare the difference in the PSV and the histologic synovitis scores between groups with and without resting pain, with and without nighttime pain, or traumatic and atraumatic RCTs.
The receiver operating characteristic curve and the best cutoff point were calculated to estimate the diagnostic performance of the PSV in the AHCA for resting pain. The cutoff point was calculated according to the Youden index, and its sensitivity and specificity were also determined. The Kruskal-Wallis test was performed to compare the PSV in the AHCA between RCT sizes. If the Kruskal-Wallis test result was statistically significant, a Steel-Dwass test was planned for paired comparisons. The association between nighttime pain and resting pain was confirmed using Fisher’s exact test. A 2-sided P value of <0.05 was considered statistically significant, and all statistical analyses were performed using the R software program, version 4.1.1 (www.r-project.org).

Association between the PSV in the AHCA and synovial inflammation

Funding: This work was supported by JSPS KAKENHI, Japan (grant number: JP19K18459).
Conflicts of interest: The authors, their immediate families, and any research foundation with which they are affiliated have not received any financial payments or other benefits from any commercial entity related to the subject of this article.

The authors would like to thank Tomotake Hayashi, Ayae Takada, and Juri Nakayama for their assistance with the collection of ultrasonographic data, as well as their useful comments.

Ethical approval for this study was obtained from the Gifu University Institutional Review Board (no.: 2019-054).

This study was conducted at the Gifu University Graduate School of Medicine.