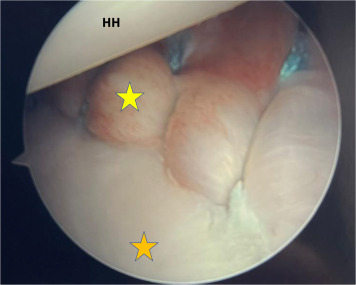 We performed a retrospective review of prospectively collected data. The study included patients undergoing arthroscopic and open shoulder stabilization for unidirectional shoulder instability, and arthroscopic surgery for rotator cuff tears, SLAP lesions, biceps tendinopathy, and acromioclavicular pathology. Data collected included the laterality of surgery, shooting dominance, and patient-reported outcome measures at the preoperative and postoperative visits. Starting at the 4.5-month clinic visit, patients were asked if they could shoot a military rifle.

One hundred patients were identified with arthroscopic and open shoulder surgery with a mean age of 30 years (range, 18-45) and a mean follow-up of 24 months (range, 12-32). The cohort consisted of patients undergoing arthroscopic Bankart repair (n = 23), arthroscopic posterior labral repair (n = 18), open Latarjet (n = 16), mini-open subpectoral biceps tenodesis (OBT) (n = 25), OBT with open distal clavicle resection (DCR) (n = 10), open DCR (n = 4), and arthroscopic rotator cuff repair with concomitant OBT (n = 4). Significant improvement in SSV, VAS, ASES, and WOSI was shown at 1-year postoperative, SSV 85, VAS 2, ASES 85, WOSI 239, P = .001. The percentage of patients reporting the ability to shoot a military rifle postoperatively were 47%, 63%, 85%, and 94% at 4.5 months, 6 months, 1 year, and 2 years, respectively. At 4.5 months postoperatively, patients who underwent surgery ipsilateral to their shooting dominance (n = 59) had a rate of return to shooting (33%) versus shoulder surgery on the contralateral side of shooting dominance (n = 41) (60%), P = .04. However, there was no significant difference in the groups at 6 months and 1 year. Additionally, there was a significant difference in the rate of return to shooting at 6 months in patients undergoing arthroscopic posterior labral repair versus the remainder of the cohort (posterior instability (33%) vs. (69%), P = .016), and a significant difference between posterior shoulder stabilization and anterior shoulder stabilization (70%), P = .03.

Shooting a rifle is a required task for many military athletes and law enforcement, and can be a leisure or competitive activity for civilian patients. Rifle shooting imparts a sudden anterior to posterior directed force against the anterior shoulder. This can lead to rare cases of symptomatic posterior shoulder instability.
5
Recurrent posterior shoulder instability after rifle shooting.
Orthopedics. 2012; 35: e1677-e1679https://doi.org/10.3928/01477447-20121023-32
Additionally, the recoil of the rifle and the need to suspend and support the weapon with both upper extremities to successfully hit a target requires unique demands on both the affected and unaffected shoulder.
11
The influence of physiobiomechanical parameters, technical aspects of shooting, and psychophysiological factors on biathlon performance: a review.
J Sport Health Sci. 2018; 7: 394-404https://doi.org/10.1016/j.jshs.2018.09.003
Rifle stability is achieved through compression of the buttstock against the shoulder while supporting the stock of the rifle with the contralateral arm through isometric elbow flexor contraction and shoulder forward elevation. Therefore, the dynamic task of rifle shooting involves a coordinated effort of the operative and nonoperative shoulder following shoulder surgery.
There is limited information on successful return to shooting following shoulder surgery. In fact, no prior studies have examined the rate or time to return to rifle shooting following shoulder surgery. This information would be valuable for military and law enforcement employers and patients, and also for patients seeking to understand the time to return to recreational and leisure shooting.
The purpose of this study is to determine the rate and timing for resuming shooting a rifle following arthroscopic and open shoulder surgery. We hypothesized that there would be a high rate of return to shooting a rifle following arthroscopic and open shoulder surgery.

After institutional review board approval, we performed a retrospective review of prospectively collected data from a single institution. The study included all active duty military patients, age 18 to 45 years old, undergoing arthroscopic and open shoulder stabilization for symptomatic unidirectional shoulder instability, as well as patients undergoing arthroscopic surgery for rotator cuff tears, superior labrum anterior to posterior (SLAP) lesions, biceps tendinopathy, and acromioclavicular (AC) pathology. One hundred twenty-four patients were identified. Patients were excluded if they had less than 1-year follow-up. Therefore, 100 patients were available with the return to shooting data, clinical outcome scores, and at least 1-year clinical follow-up.

Patients were indicated for shoulder arthroscopy, open subpectoral biceps tenodesis, with or without distal clavicle resection if they had history, physical examination, and advanced imaging findings consistent with a symptomatic SLAP tear, rotator interval pulley lesion, or biceps tenosynovitis. Patients with both anterior Zone 2 biceps groove tenderness to palpation and a positive Speed’s examination that replicated their anterior shoulder pain underwent a preoperative ultrasound-guided biceps groove diagnostic injection of a combined mixture of local anesthetic and steroid. For these biceps tenosynovitis patients, they were indicated for surgery if they sustained 75%-100% pain relief from the injection. Furthermore, for patients with symptomatic AC joint pathology, patients were indicated for surgery following significant improvement in a fluoroscopic guided AC joint diagnostic and therapeutic injection. Young active duty patients with rotator cuff tears were indicated for surgery after failure of at least 6 weeks of nonoperative treatment with dedicated physical therapy, and had history, physical examination, and imaging findings concordant with a symptomatic rotator cuff tear.
All biceps tenodesis, AC joint and rotator cuff repair procedures were performed in the beach chair position first with a diagnostic shoulder arthroscopy and biceps tenotomy, followed by an open subpectoral biceps tenodesis with a unicortical biocomposite double-loaded suture anchor as previously described.
13
A simple surgical technique for subpectoral biceps tenodesis using a double-loaded suture anchor.
Arthrosc Tech. 2013; 2: e191-e196https://doi.org/10.1016/j.eats.2013.02.005
All distal clavicle resections were done through an open superior approach with 8 mm of distal clavicle resection. Rotator cuff repairs were performed arthroscopically with suture anchors. Postoperatively, all biceps tenodesis patients underwent a standard institutional rehabilitation protocol with passive range of motion starting at 2 weeks, active range of motion at 6 weeks, and strengthening starting at 8 weeks. Heavy lifting or resisted supination was prohibited until 8 weeks postoperative. For patients who underwent arthroscopic rotator cuff repair, rehabilitation was generally 4 to 6 weeks in a shoulder immobilizer in abduction (this was based on the intraoperative size and morphology of the tear). Then passive range of motion began at 4 to 6 weeks, active range of motion at 8 weeks, and rotator cuff strengthening at 12 weeks.

Patients were indicated for the open Latarjet procedure if they had “critical” (greater than 20 percent) glenoid bone loss, greater than 13.5% glenoid bone loss with an offtrack Hill–Sachs lesion, and had history of a failed arthroscopic Bankart repair with bipolar bone loss. All Latarjet procedures were performed in the beach chair position through an open approach, subscapularis split, and two solid fully threaded 3.5 mm bicortical screws. Postoperatively, Latarjet patients started pendulum exercises immediately, passive range of motion at 2 weeks postoperatively, active range of motion at 4 weeks, and strengthening at 8 weeks. All arthroscopic and open shoulder surgery patients were allowed to return to shooting a rifle at 4.5 months per the standard institutional rehabilitation protocol.

Demographic data were collected for all patients, including the laterality of surgery, patient hand dominance, and shooting dominance (Table I). Shooting dominance was defined as the side the patient places the rifle on while firing. For example, a left shooting dominant patient placed the buttstock in the left anterior shoulder and pulled the trigger with the left index finger. Patient-reported outcomes collected included the Subjective Shoulder Value (SSV), American Shoulder and Elbow Surgeons (ASES) score, visual analog scale (VAS) score for pain, and the Western Ontario Shoulder Instability (WOSI) index at the preoperative visit and short-term postoperative visits. At the 4.5-month, 6-month, 1-year, and 2-year clinic visits, patients were asked if they could shoot a military rifle and patient-reported outcome measures were collected. The current military rifle in use is the M4 carbine which is a 5.56 mm, gas operated, magazine fed, carbine assault rifle (Fig. 2). The civilian equivalent rifle is the AR-15. Although officers in the military (as opposed to enlisted soldiers) are typically assigned a pistol for shooting, the 2 officers in our cohort were “dual carry,” and had to qualify also on an M4 rifle.
Table IDemographics.
SD, standard deviation; R, right; L, left; SLAP, superior labrum anterior to posterior; AC, acromioclavicular; DCR, distal clavicle resection; BT, biceps tenodesis; RCR, rotator cuff repair.
Bold indicates statistical significance value (P < .05).

Descriptive statistics were determined for the study cohort’s variables. Univariate analysis was performed for all variables. The Mann-Whitney nonparametric test for unpaired samples was used for continuous variables, and the 2-tailed Fisher exact test was used for categorical data. Multivariate logistic regression was utilized to determine independent variables significantly associated with the ability to return to shooting at 6 months postoperatively. The statistical significance was set to a P value of .05. All statistics were performed using online software (https://www.easymedstat.com).

One hundred patients were included in the final analysis. The mean age was 30.8, range (18-45), with a predominantly male cohort. Ninety percent of the cohort was right hand dominant, and 84% reported right side shooting dominance, with 16% left shooting dominant (Table I). Median baseline preoperative patient-reported outcomes were as follows: SSV 50, VAS 7, ASES 42, and WOSI 1419. Significant improvement in SSV, VAS, ASES, and WOSI was shown at 1-year postoperative, SSV 85, VAS 2, ASES 85, WOSI 239, P = .001 (Table II). The percentage of patients reporting the ability to shoot a military rifle after surgery was the following: 47%, 63%, 85%, and 94% at 4.5 months, 6 months, 1 year, and 2 years, respectively. At 4.5 months postoperatively, patients who underwent shoulder surgery ipsilateral to their shooting dominance (n = 59) had a rate of return to shooting (33%) vs. shoulder surgery on the contralateral side of shooting dominance (n = 41) (60%), P = .04. However, there was no significant difference in the groups at 6 months and 1 year (Fig. 3).
Table IIClinical outcomes.
SSV, Subjective Shoulder Value; VAS, visual analog scale score for pain; ASES, American Shoulder Elbow Surgeons score; WOSI, Western Ontario Shoulder Instability Index.

In subgroup analyses, there was no difference in rate and time to return to shooting in patients who underwent arthroscopic (n = 39) vs. open shoulder surgery (n = 61). Furthermore, there was no significant difference in the rate and time to resuming shooting a rifle at any time point between patients undergoing surgery for a diagnosis of shoulder instability (n = 57) vs. non-instability diagnoses (n = 43) (Table III).
Table IIIReturn to shooting: instability surgery versus non-instability surgery.
SD, standard deviation; R, right; L, left.
Bold indicates statistical significance value (P < .05)

There were 4 complications (4/95) 4.2%. Four patients who underwent open Latarjet had transient sensory neuropraxias (3 axillary and 1 musculocutaneous) which all completely resolved by 4 weeks postoperatively. Two of the axillary nerve sensory neuropraxias were identified in the postoperative recovery room and resolved by the 2-week postoperative visit. This was a 4/16 (25%) rate of transient sensory neuropraxia. There were no permanent nerve injuries. Three of the 4 Latarjet procedures with temporary sensory neuropraxias returned to shooting at 4.5 months, and the other patient reported returning at 6 months postoperatively. Two patients who underwent arthroscopic Bankart repair reported reinjuries with recurrent traumatic subluxation events (2/23) (8.7%), and declined to undergo further surgery. The first of these patients reported not being able to return to shooting at 6 months postoperatively, and the second patient reported the ability to return to shooting at 4.5 months postoperatively and then sustained the reinjury 1 year after surgery. One patient who underwent open Latarjet for greater than 20% glenoid bone loss had coracoid graft lysis without recurrent instability. He later sustained a traumatic rotator cuff tear after a motor vehicle collision and underwent an arthroscopic rotator cuff repair.

The authors would like to thank Elisabeth Robinson and Christy Woodruff for their assistance with data collection.

Funding: No funding was disclosed by the authors.
Conflicts of interest: The authors, their immediate families, and any research foundation with which they are affiliated have not received any financial payments or other benefits from any commercial entity related to the subject of this article.

Published by Elsevier Inc. on behalf of American Shoulder and Elbow Surgeons.