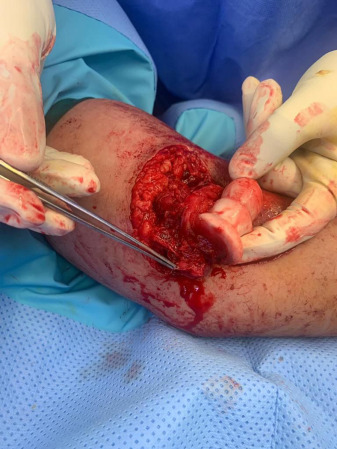 Open elbow dislocation with no osseous injury associated with median nerve transection
Previous ArticleMagnetic resonance imaging for elbow pathology: overused by both orthopedic surgeons and primary care providers
Next ArticlePhysical functions, to be or not to be a risk factor for osteochondritis dissecans of the humeral capitellum?

Open elbow dislocation is a rare injury that is commonly associated with periarticular fractures, severe soft tissue damage, and neurovascular injury. Limited literature is available on the management and outcomes of this injury. Significant post-traumatic morbidity, stiffness, and chronic instability at the elbow joint are potential outcomes that orthopedic surgeons aim to avoid. To our knowledge, we present the first case report of a non-fracture open elbow dislocation associated with median nerve transection in a 14-year-old male.

A previously healthy, left-hand dominant, 14-year-old male presented to a general hospital via ambulance after being involved in an all-terrain vehicle accident. At a high speed, the all-terrain vehicle had flipped over and landed on the patient’s extended arm. The patient initially presented with severe pain and a large open wound. A primary survey did not reveal any remarkable findings. A secondary survey revealed a transverse 10cm wound over the left antecubital region and gross deformity of the elbow suggestive of a posterior elbow dislocation as the distal humerus was visible through the wound. Initial management included reduction, removal of gross debris, preliminary closure of the wound, and immobilization in an above elbow slab.
A neurovascular examination revealed complete motor and sensory deficits in the distribution of the median nerve. Both the radial and ulnar pulses were easily palpable. Radiographs were obtained revealing a reduced elbow joint with no associated fractures. The patient received triple antibiotics (cefazolin, clindamycin, and metronidazole) and was subsequently referred to our tertiary orthopedic hospital. The patient was admitted and transferred to the operating room for exploration, irrigation, and operative fixation.
Intraoperative assessment revealed an unstable elbow, dislocating at 80 degrees of flexion. The brachial artery was intact; however, the median nerve was completely transected with visible bruising on both ends. The distal humerus was devoid of any soft tissue attachments. The flexor pronator mass, medial collateral ligament (MCL), lateral collateral ligament (LCL), and the anterior capsule were completely torn (Fig. 1). Both the triceps and biceps were intact and attached to the olecranon and radial tuberosity, respectively. The brachialis was completely avulsed from the coronoid process.
After thorough irrigation with normal saline, the ulnohumeral joint was reduced and the wound was extended proximally and distally in a z-fashion. A separate posteriolateral Kocher approach was performed.
Medially, the MCL and the flexor mass were repaired using double-loaded all-suture anchors on the medial epicondyle. Laterally, the LCL and common extensor origin were repaired using a double-loaded knotless suture anchor on the lateral epicondyle. Good varus and valgus stability were achieved, and the elbow was stable in the tested range of 20-120. Further range was avoided to protect the repair. An external fixator was applied and good alignment was achieved (Fig. 2). The anterior capsule was repaired using Vicryl no.1.
After trimming the bruised edges, the median nerve was repaired using 5-0 and 6-0 synthetic nonabsorbable monofilament sutures (Prolene) and nerve glue. The external fixator was applied at 90 flexion for a tension-free median nerve repair.
The patient did not have any immediate or early postoperative complications and the wound healed uneventfully. The patient was discharged with oral analgesics and nonsteroidal anti-inflammatories. Follow-up was scheduled regularly; at one month postoperative, initial improvements were seen with regards to median nerve motor and sensory innervation. The external fixator was removed at 2 months postoperatively. Immediate flexion-extension arc after the removal was 80 – 90 degrees. Manipulation under anesthesia achieved an arc of 15-135. Progressive improvement until 18 months postoperative was evident and the final arc of flexion-extension was 22 – 136 degrees. Further, the pronation-supination arc was 75 – 95 degrees (Fig. 3). At 18 months postoperative, the power was 4+ (Fig. 4), however, some mild reduction in sensation to fine touch was present. The calculated American Shoulder and Elbow Surgeons score was 92 at his final follow-up. Heterotopic ossification was evident over MCL and LCL on plain radiographs. Although there was considerable ossification present, this was asymptomatic (Fig. 5).

The elbow is the most commonly dislocated major joint in pediatrics, and second only to the shoulder in adults.
1
Acute elbow dislocations.
Orthop Clin North Am. 1999; 30: 63-79
,
2
Acute elbow dislocations.
Orthop Clin North Am. 2008 Apr; 39 (v. https://doi.org/10.1016/j.ocl.2007.12.004): 155-161
Elbow dislocation is often classified into simple and complex dislocations, in which the latter is associated with periarticular fractures, whereas the former is limited to soft tissue injuries.
1
Acute elbow dislocations.
Orthop Clin North Am. 1999; 30: 63-79
Most simple elbow dislocations are treated nonoperatively and possess favorable outcomes, with only about 2.3% of such cases requiring surgical stabilization within a year.
4
The frequency and risk factors for subsequent surgery after a simple elbow dislocation.
Injury. 2015; 46: 1156-1160https://doi.org/10.1016/j.injury.2015.02.009
The extent of soft tissue injury is usually predictive of the elbow instability after reduction is performed.
6
Simple elbow dislocation.
Shoulder Elbow. 2017; 9: 195-204https://doi.org/10.1177/1758573217694163
Examination under anesthesia can be utilized to assess postreduction stability, and aid selection of patients that would likely benefit from early operative stabilization.
6
Simple elbow dislocation.
Shoulder Elbow. 2017; 9: 195-204https://doi.org/10.1177/1758573217694163
,
7
Initial joint stability affects the outcome after conservative treatment of simple elbow dislocations: a retrospective study.
J Orthop Surg Res. 2015; 10: 128https://doi.org/10.1186/s13018-015-0273-x
An unstable elbow at 30 flexion or higher often suggests that surgical repair is more favorable.
5
The unstable elbow.
Instr Course Lect. 2001; 50: 89-102
There are limited data in the current literature on the optimal management, outcomes, and natural progression of similar cases.
8
Functional outcomes and complications of open elbow dislocations.
Obere Extremität. 2018; 13: 204-210https://doi.org/10.1007/s11678-018-0466-0
Further, the combination of various associated injuries makes it difficult to anticipate outcomes. The rarity of our case stems from the age of the patient, the open elbow dislocation, the absence of fractures, and the transection of the median nerve. Predicting outcomes and counseling the patient and their families may prove challenging, and providers may benefit from establishing realistic expectations, especially in the setting of a median nerve transection.
3
Dissociating advances in orthopaedic trauma management from the climbing patient expectations.
Eur J Trauma Emerg Surg. 2022 Apr; 48: 1487https://doi.org/10.1007/s00068-021-01705-0
The elbow is prone to heterotropic ossification after dislocation. The severity of trauma and tissue damage correlates with the risk of heterotopic ossification development.
9
Heterotopic ossification of the elbow.
J Shoulder Elbow Surg. 1997; 6: 321-332
Despite receiving prophylactic nonsteroidal anti-inflammatory medication, our patient developed significant heterotropic ossification as was clearly visible on postoperative radiographs. However, the clinical outcomes suggest that this was asymptomatic and thus was only followed up.
In our case, we report satisfactory outcomes in the early repair of this injury. The functional range of motion was restored and the median nerve had almost completely recovered. Early treatment coupled with intensive physiotherapy may optimize outcomes in similar cases.

Funding: No funding was disclosed by the authors.
Conflicts of interest: The authors, their immediate families, and any research foundation with which they are affiliated have not received any financial payments or other benefits from any commercial entity related to the subject of this article.
Patient consent: Obtained.