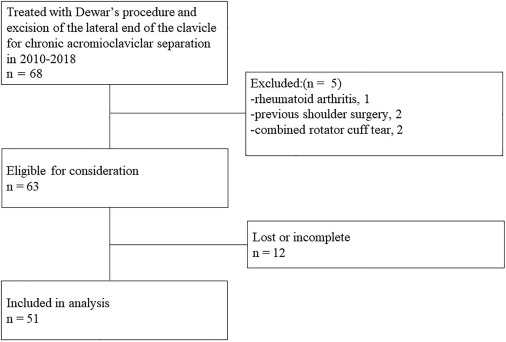 Dewar’s procedure for transferring the coracoid process with the short head of biceps and coracobrachialis was reported in 1965 for treatment of both acute and chronic acromioclavicular (AC) joint separation, but little contemporary literature exists around the procedure. We report the clinical results of coracoid process transfer with excision of the lateral end of the clavicle for chronic AC joint separation.

Fifty-one patients (39 men and 12 women, mean age 46 ± 16 years) were included in the study. Clinical outcomes were evaluated using the American Shoulder and Elbow Surgeons (ASES) and the Japanese Orthopaedic Association (JOA) scores, as well as by measuring active range of motion (ROM) in the shoulder, before-after (minimum follow-up time of 24 months [27 ± 3 months]) surgery. Plain radiographs were used to examine stability of the AC joint and bone union of the graft.

The mean ASES and JOA scores increased (from 61 ± 14 to 91 ± 6, and from 54 ± 9 to 89 ± 8, respectively) at the time of final follow-up. There were no differences in active elevation and external rotation between before-after operation. Six patients whose grafts were fractured or displaced, showed complete or partial loss of reduction of the AC joint.

By transferring the coracoid process, the AC joint regained stability after chronic joint separation. Although potential complications related to the graft still need to be addressed, Dewar’s procedure and lateral clavicle resection could be a reliable treatment of chronic AC joint separation.

Between 2010 and 2018, a total of 68 patients with chronic AC separation underwent Dewar’s procedure and excision of the lateral end of the clavicle at our institution. An AC-joint injury older than 3 months was defined as chronic. Intolerable pain and functional disability after conservative treatment were used as indications for surgery. One patient with rheumatoid arthritis and two patients who took previous surgery of the shoulder joint were excluded from this study. Two patients whose combined rotator cuff injuries were repaired at the same surgery session, were also excluded from the study. That left 63 patients eligible for consideration. Of those, 12 patients were lost before the minimum study follow-up of 2 years or had incomplete datasets, and 81% (51 of 63) were analyzed retrospectively (Fig. 1). The study protocol was approved by the Institutional Review Board of our hospital (No. E 253). Although the study included patients treated before it was approved by the board, each patient provided written informed consent prior to their surgery for being included in any treatment study.

American Shoulder and Elbow Surgeons (ASES) scores and Japanese Orthopaedic Association (JOA) scores were obtained from patients preoperatively and at the final follow-up. Shoulder elevation and external rotation were assessed using both active and passive range of motion (ROM) with the patient in sitting position. Muscle strength was evaluated by the manual muscle test (MMT) on a scale of 0 to 5, where 5 = normal amount of resistance to applied force, 4 = ability to move the segment (the arm) through its ROM against strong to moderate pressure, 3 = ability to move the segment through its ROM against gravity, 2 = ability to move the segment through its ROM but not against gravity, 1 = presence of contraction in the muscle without joint motion, and 0 = no muscle contraction. Strength of shoulder elevation was measured with the thumb up, and external rotation strength was measured with the arm at the side. Elbow flexion strength was measured in 90° of elbow flexion. These assessments were performed by senior physical therapists (none of the authors) preoperatively and at the final follow-up.
All patients had preoperative plain radiographs and CT scans, and were classified by the surgeon as having Rockwood III-V injuries (Fig. 2A). The radiographs in two positions at the last follow-up were used to determine whether each AC joint maintained the position (Figs. 2B, 2C). According to the method of Jiang et al
11
Proximally based conjoined tendon transfer for coracoclavicular reconstruction in the treatment of acromioclavicular dislocation.
The Journal of bone and joint surgery American. 2007; 89: 2408-2412https://doi.org/10.2106/jbjs.f.01586
, maintenance of reduction of the AC joint in the radiographs with arm dependent position was defined as: (1) a maintained reduction (Fig 2B); no side-to-side difference was seen; (2) a partial loss of reduction (Fig. 3A); there was a side-to-side difference of less than the width of the clavicle; and (3) a complete loss of reduction (Fig. 3B); there was a side-to-side difference of more than the width of the clavicle. The radiographs with arm elevation were used to evaluate maintenance of reduction in the anteroposterior direction. The radiographs at the last follow-up were also used to determine whether the graft bone was fused to the clavicle or not.

The patient was placed in the beach-chair position under general anesthesia. A curved skin incision was made from posterior to the AC joint to the tip of coracoid process. The AC joint was inspected and the intra-articular disc with a 5 mm segment of the distal clavicle was resected. The width of resection was determined to prevent bone-to-bone contact after operation.
2
The role of the acromioclavicular ligaments and the effect of distal clavicle resection.
The American journal of sports medicine. 1996; 24: 293-297
The anterior deltoid was split and the coracoid process was exposed. The coracoid was osteotomized 1 cm proximal to the tip of the process with the conjoined tendon (the short head of biceps and coracobrachialis) preserving the pectoralis minor and CA ligament attachments to the coracoid base proximal to the site of osteotomy. Osteoperiosteal decortication was performed anterior bottom of the clavicle at the distal site of the conoid tubercle and a screw hole was directed posteriorly to the upper clavicle. A 4 mm arbeitsgemeinschaft für osteosynthesefragen (AO) short thread cancellous screw and washer (Depuy Synthes Companies, Johnson & Johnson Medical Devices; Warsaw, IN, USA) were used to secure the graft, while the shoulder and elbow were flexed. Fixing the graft provided the reduction of the AC joint. There was no need reducing and securing the position before the transfer. Lastly, upper surface of the joint and the deltotrapezial fascia were repaired. A schematic drawing of the procedure is shown in Fig. 4.
Postoperatively, the shoulder was kept in a sling for six weeks. Each patient was supervised by a physical therapist. Patients began pendulum exercises and assisted ROM exercises. Active exercises were started at week 6 post surgery. Resistive strengthening exercises were initiated at 2 months, and all occupational or sports activities were permitted at 6 months.

Data are presented as mean ± SD. We compared findings between the unstable and stable groups using unpaired t-test, and between the preoperative and postoperative timepoints, using paired t-test. Categorical parameters were analyzed with the chi-square test.

Some chronic AC separations result in persistent symptoms and require surgical intervention.
13
Evaluation and treatment of acromioclavicular joint injuries.
The American journal of sports medicine. 2007; 35: 316-329https://doi.org/10.1177/0363546506298022
Many surgical techniques have been reported for the treatment of chronic AC separation, but there is no gold-standard, ideal technique.
15
Optimal Management of Acromioclavicular Dislocation: Current Perspectives.
Orthopedic research and reviews. 2020; 12: 27-44https://doi.org/10.2147/orr.s218991
,
17
Treatment of acromioclavicular joint separations in Japan: a survey.
JSES international. 2021; 5: 51-55https://doi.org/10.1016/j.jseint.2020.09.008
In 1967, Dewar and Barrington
5
THE TREATMENT OF CHRONIC ACROMIO-CLAVICULAR DISLOCATION.
The Journal of bone and joint surgery British. 1965; 47: 32-35
described a method transferring the coracoid process with the short head of biceps and coracobrachialis. Several authors
1
Acromioclavicular dislocations: treatment by transfer of the conjoined tendon and distal end of the coracoid process to the clavicle.
Clinical orthopaedics and related research. 1978; : 157-164
,
8
Coracoid process transfer for acromioclavicular dislocations. A report of 20 cases.
Clinical orthopaedics and related research. 1989; : 184-194
reported its use in the past, but limited recent evidence on the procedure has been published. Many surgeons would be familiar with the coracoid osteotomy because the Bristow–Latarjet procedure transferring the coracoid is a common surgery for anterior shoulder instability with significant glenoid bone defects,
12
History of surgical intervention of anterior shoulder instability.
J Shoulder Elbow Surg. 2016; 25: e139-150https://doi.org/10.1016/j.jse.2016.01.019
and we thought the procedure could be a useful treatment option for chronic AC separations.
In the current study, the coracoid was osteotomized 1 cm proximal to the tip of the coracoid process. We made a particular effort in preserving the CA ligament and the pectoralis minor. There is a risk sacrificing the CA ligament which is against anterior superior migration of the humeral head if a patient later has a large rotator cuff tear. Also, detachment of the pectoralis minor was avoided in order to avoid altering scapular position and motion.
3
Scapular dyskinesis after Latarjet procedure.
J Shoulder Elbow Surg. 2016; 25: 422-427https://doi.org/10.1016/j.jse.2015.08.001
One anatomic study
6
An anatomic study of the coracoid process as it relates to bone transfer procedures.
J Shoulder Elbow Surg. 2011; 20: 497-501https://doi.org/10.1016/j.jse.2010.08.015
showed the lengths from the tip to the anterior pectoralis minor, and from the tip to the anterior CA ligament averaged 4.6 mm and 7.8 mm respectively. The widths of their insertions were 11.8 mm for the pectoralis minor and 17.9 mm for the CA ligament, supporting most of their fibers were preserved during the osteotomy.
Dewar’s is a simple procedure with the transfer of the coracoid tip. We observed all the joints were reduced when fixing the tip of the coracoid process to the clavicle. Reducing the AC separation which might be difficult for chronic cases, was not necessary before the transfer. We thought it was meaningful to explore the potential and expand the uses of this conventional technique. Postoperative ASES scores reportedly averaged 95.1 for the CC reconstruction and 87.9 for the Weaver-Dunn procedure.
4
Acromioclavicular joint injuries.
The Orthopedic clinics of North America. 2000; 31: 177-187
The scores for the coracoid process transfer were compatible with those previous reports. Postoperative plain radiographies showed there was no widening in the CC space as long as the graft was fused to the clavicle. Narrowing in the CC space was not observed either. However, we must admit the complication rate was rather high. Pseudoarthrosis of the coracoid graft in the Bristow–Latarjet procedure was pointed out to be usually related to unicortical or single screw fixation.
7
Contraindications and complications of the Latarjet procedure.
Shoulder & elbow. 2018; 10: 15-24https://doi.org/10.1177/1758573217728716
Using two screws for a longer graft might prevent fracture or displacement of the bone graft with chronic AC separation as well. If the complications about fixing the graft are solved, the procedure could be a salvage after failure of an anatomic reconstruction in addition to being a primary procedure.
The current study has several limitations. It was a retrospective study, and there was no control group to compare with. Biomechanical assessment of the procedure is needed. Plain radiographs only in two positions were used for assessment. Most patients showed reduction of the AC joint, but radiographs under stress loading would be needed to detect subtle instability.
4
Acromioclavicular joint injuries.
The Orthopedic clinics of North America. 2000; 31: 177-187
Some author added tenodesis at the coracoid bed after this Dewar’s procedure to reconstruct the CC ligaments.
16
Open Anatomic Coracoclavicular Ligament Reconstruction by Modified Conjoint Tendon Transfer for Treatment of Acute High-Grade Acromioclavicular Dislocation.
Arthroscopy techniques. 2018; 7: e1157-e1165https://doi.org/10.1016/j.eats.2018.07.013
Further experimental study could determine whether just the muscle transfer would work to reconstitute a static stabilizer.

By transferring the coracoid process, the AC joint regained stability after chronic joint separation. Although potential complications related to the graft still need to be addressed, Dewar’s procedure and lateral clavicle resection could be an option for chronic AC joint separation.

Funding: No funding was disclosed by the authors.

Conflicts of interest: Kie Mimori: All the patients were treated in this author’s private hospital. Any other financial payments or other benefits from any commercial entity related to the subject of this article were not received.

The other authors, their immediate families, and any research foundation with which they are affiliated have not received any financial payments or other benefits from any commercial entity related to the subject of this article.

The study was approved by the Nobuhara Hospital Institutional Review Board. (No E253).